The building of the Öland Bridge officially started on 30 December 1967, and it opened on 30 September 1972.

The bridge was designed and built with reinforced concrete by Swedish bridge-builders. An average of 116 persons worked on the bridge, with approx. 160 construction workers during the most hectic period. Only a third of the structure is visible, the remaining two-thirds is built under the surface of the water. In some places, the foundations of the bridge have been laid 22 metres under the bottom of the Kalmar Straight. 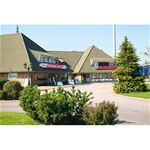 Distance: 1.8 km
This hotel is located in Kalmar. Welcome to Rasta Kalmar! This nice hotel is located next to the E22 motorway, near the Öland Bridge. It is a hotel with a friendly atmosphere offering single, double and family rooms to affordable prices.
Book now 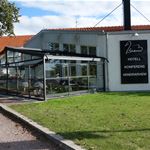 Distance: 1.3 km
Combined budget hotel and youthhostel in the northern part of the centre. Stay comfortable and get a good night sleep at a fair price.
Book now 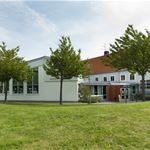