During the last few hundred years a great number of the men of Kalmar have been employed in building ships at "Varvsholmen" (the "Ship Yard Island") for Swedish as well as foreign ship owners. It is their history, and at the same time the shipping history of Kalmar, which is exhibited at Kalmar Maritime Museum. Seamen of all categories and their families have generously contributed to the creation of this museum by donating objects of many kinds.

The collections have grown at a steady rate and the museum is today one of the more interesting smaller maritime museums in Sweden. The museum is a highly active one and is steadily growing and developing. The history of Kalmar constantly reminds us that its most important industries were shipping and shipbuilding.

Every year the museum receives "new objects". Anything from great models of ships to exotic shells collected on a tropical beach on the other side of the world. It is exciting to go exploring among the more than 5,000 objects housed in the museum. You may find a model of your great-grandfather´s brig or maybe the name of one of your ancestors is mentioned in one of the old logbooks they have in their collection. It is simply the genuine maritime milieu and spirit that are so greatly valued by many of our visitors.

Kalmar Maritime Museum is an independent foundation, which is entirely self-supported by the non-profit work of members of the association. No federal or municipal body supports it. Most of the active members are, or have been, seamen of various ranks and the collective knowledge is indeed great. The collecting of objects goes on permanently as well as the documentation of shipping in general.

The museum was inaugurated on November 28th, 1942, but already by 1934 the Kalmar Shipping Society was established with the aim of collecting objects and memorabilia connected to the shipping in Kalmar Sound. In March 1942, Mrs. Martina Lundgren, the widow of Mr. W. R. Lundgren, famous founder of the Swedish Transatlantic Steam Ship Co. and of the Swedish America Line, donated the sum of 100,000 Swedish crowns for the purchase of the property Södra Långgatan 81, where the museum's collections have been housed ever since. 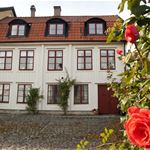 Distance: 313 meters
Welcome to our Bed and Breakfast in Kalmar's charming center. From our house we have views of Kalmar, port and city gate.
Book now 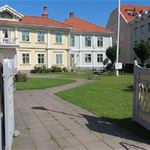 Distance: 224 meters
Kalmar Sjömanshem hostel is located in the city center of Kalmar only three minutes from the beach and provides a good and affordable accommodation with self-catering in our newly renovated and well-equipped guest kitchen. Some showers and toilets are also newly renovated. Kalmar is a beautiful city which comes to life during summer with live music and theater. The city is beautifully located by the sea, close to the island Öland which is also a popular place to visit. Parking in the nearby with charge.
Book now 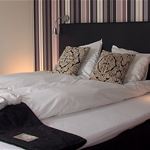